Back to the impact of South China's port congestion

More than 600,000 TEUs are estimated to have been affected by fallout from a Covid-19 outbreak around the port of Yantian in southern China. Ports around the world are bracing for a severe equipment shortage in the coming weeks as the U.S. peak season begins. 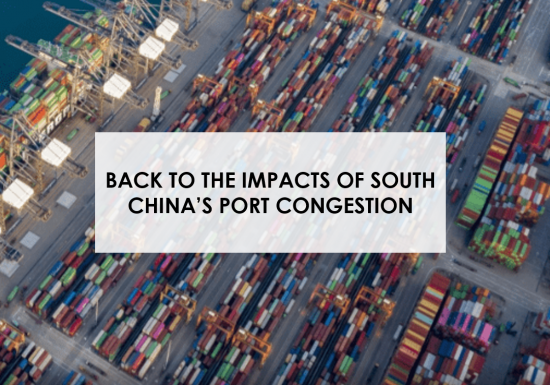 Yantian port will resume full operation from 00:00 on June 24. Following the YICT announcement, with the full support of relevant government departments and on the premise of strict epidemic prevention, we can confirm that COVID-19 has been effectively under control in Yantian port, and the operational capacity of the terminals has steadily recovered.

Yantian will continue to strictly implement epidemic prevention, control measures and promote products in a safe and orderly manner.

THE IMPACT OF THE SOUTH CHINA'S PORT CONGESTION

A few weeks after the detection of positive cases of COVID-19 in the ports of South China, we are able to assess the consequences. According to EZOCEAN's information on June 11, cited by Container-News, it was found that during the period from May 23 to June 26, more than 135 calls were canceled and 63 added in the region, the ports experienced heavy congestion, which greatly reduced their productivity.

Concerning the alliances, 40% of the cancellations of calls, 55 in total, were made by the OCEAN alliance (CMA CGM, COSCO, Evergreen, OOCL), followed by 2M (Maersk, MSC) with 22% and THE ALLIANCE (Yangming, Hapag-Lloyd, ONE) with 18%.  Regarding the addition of new ports of call, OCEAN is involved with 38%, followed by 14% and 9% respectively for THE ALLIANCE and 2M.

“The situation at China's Yantian Port is having a negative effect on scheduling and availability of equipment” reported Maersk. In the wake of the suspension of Yantian International Container Terminal's (YICT) West zone, many ships avoided the port of Yantian or called at other ports, leading to congestion at other ports. Even though the western area of YICT reopened on June 10, the disruption of shipping schedules and equipment availability will last for several more weeks.

In this disruptive situation, many companies have adapted and come up with new solutions. Two Chinese carriers have launched transpacific traffic to avoid excessive rates and uncertain situations in South China ports (Splash). Home Depot, one of the country's largest importers, decided to reserve its own ship to deal with supply chain problems (CNCB).

With many ships returning to Yantian Port, Bansard International expects the South China ports to return to normal by mid-July. Our team is working on solutions from Shekou, Hong Kong, as well as rail solutions to continue to provide you with the best advice.

All Bansard Guangzhou & Shenzhen employees are still working from their offices. Do not hesitate to contact your usual Bansard contact person or sales@bansard.com, our teams remain at your disposal.