Perspective on the transport situation in China and future impacts

In addition to the dramatic events happening in Ukraine, impacting the global supply chain of many essential materials, we have to take into account the situation of China which since the end of March is experiencing its biggest pandemic since the Wuhan episode, and those causing serious consequences in the world of transport. 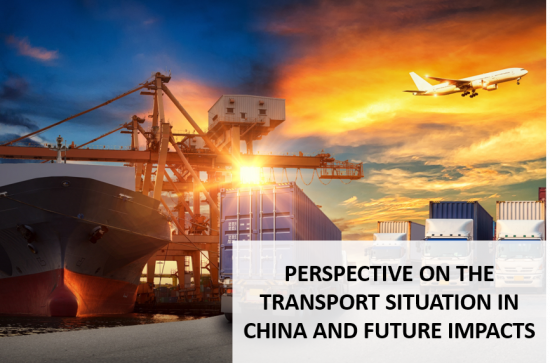 Since the Wuhan shutdown, China is facing the largest outbreak since the beginning of the pandemic. The city of Shanghai is one of the hardest-hit places, with local authorities enforcing strict stay-at-home measures with travel restrictions. This is not without consequences as Shanghai is one of the largest industrial centers in China, with a high concentration of suppliers to the automotive and electronics sectors and the city-province also contains the largest container port and an international airport hub, which is among the top 10 in the world in terms of volume.

Notices of blanksailing and flight cancellations

Most warehouses and factories are currently closed, and around nine out of ten trucks are no longer operational (freightwave), the port and airport have limited operations. Due to the lack of manpower and cargo, some shipping companies have cancelled their calls in Shanghai and airlines have announced numerous flight cancellations.

Backlogs for these vessels increased after the Shanghai lockdown was put in place at the end of March. Two weeks later, congestion spread to the nearby city of Ningbo-Zhoushan, a port used by many shipping companies to avoid the shortage of truckers and the closure of warehouses in Shanghai. On April 11, Bloomberg reported that more than 197 container ships were still waiting on Shanghai and Ningbo coasts (+17% compared to a month ago), and by domino effect, other ports would be affected such as Tianjin with 54 ships waiting (+29% in one month).

Maersk, the second-largest container ship operator, announced last week it was no longer accepting bookings for Shanghai for refrigerated and part of dangerous cargo from April 14th.

From a domino to a butterfly effect

Since the start of the pandemic, in the ocean freight industry the situation of Chinese ports, seven of which are in the top 10 worldwide in terms of volume, is setting the tempo for future global shipping operations. It may be recalled that last May, the Yantian container terminal in the port of Shenzhen reduced its productivity to 30% for a month to eradicate a local outbreak. It took weeks after the port reopened to clear the backlog of cargo. The effects spread to the United States and Europe, causing port congestion and transit times three times longer than normal.

Since the Shanghai lockout, the immediate impact is being felt on ongoing operations, mostly in China. In the long term, our teams expect major repercussions in Europe within a month, especially when stocks start to build up. Congestion and equipment shortages are likely to deteriorate in the coming weeks.

Stabilization of rates at higher prices

On export traffic from China to Europe or the USA, the shipping lines, clustered into alliances, control capacity and the available supply. Faced with steady demand and supply chain disruptions, this status quo does not allow for improvements in service quality or transit time. Nor is any reduction in freight rates envisaged. At best, our teams expect prices to stabilize at high levels, excluding fuel surcharges as BAF and port congestion.

The slowdown in Chinese exports should provide temporary relief to congested ports in North America and Europe. But our team anticipates a cascade of delayed cargo to follow as soon as the closures are lifted. The volume of cargo will far outstrip the handling capacity of the ports, with containers clogging terminals faster than they can be transferred to inland transport and pushing ships into long lines offshore. And this, is a forecast, that our teams foresee on the condition that the pandemic in Shanghai, even in Greater China, is contained in the next weeks.

Taking these elements into account and anticipating these future difficulties is already the first step in pushing for a revision of the supply chains and an acceleration of strategic reflections in terms of relocation and sourcing. In the meantime, for all China imports and exports, our team recommends:

Keep up to date with the situation in China and Asia through our dedicated page, regularly updated. For more information, please contact our team at sales@bansard.com